This mini-project covers the functionality of a DHT11 humidity and temperature sensor module. It is an accurate and inexpensive sensor that has an ADC to convert analog values of humidity and temperature. The 8-bit microcontroller in the sensor is used for data conversion. It provides reliable output results when the ambient humidity in the range from 20% RH to 90% RH, and a temperature range of 0 ° C to 50 ° C. It is good for most home and everyday applications. The expected data outputs can be seen on the serial monitor of the Arduino and the LCD so that you can compare the two.

It consists of a Humidity Sensing Component, an NTC Temperature Sensor or Thermistor, and an IC on the back side of the sensor. To measure the humidity, two electrodes with a moisture holding substrate determine the humidity. As the humidity changes, the conductivity of the substrate changes or the resistance between these electrodes changes. This change in resistance is measured and processed by the IC which makes it ready to be read by a microcontroller. 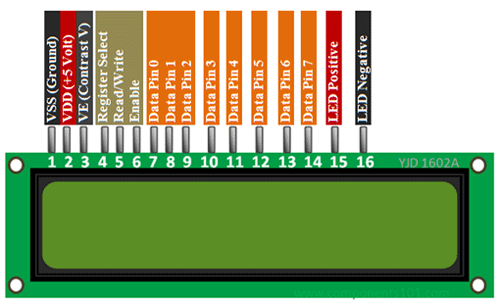 As shown in the image above, the pins of the LCD have different functions.

Pins 1 and 2 – These are the ground and 5V source pins to power up the LCD.

Pin 3 – It’s connected to the middle leg of a 3-pin trimmer resistor/potentiometer to adjust the LCD brightness.

Pin 4 – The register select is usually connected to the microcontroller, in this case, the Arduino, to shift between command/data register.

Pin 5 – It’s used to read/write the data. If you’ll only use this to write data to the LCD, you connect it to a ground.

Pin 6 – It’s connected to a microcontroller pin to toggle between 1 and 0 for data acknowledgment.

Pin 15 and 16 – These are the backlight LED pin positive and negative terminal respectively.

What is relative humidity?

To solve the relative humidity:

What is heat index?

The wiring diagram is kind of a bit confusing but the details for pin configurations of the LCD and DHT11 are indicated in the notes in the picture above. Some DHT11 devices have 4 pins and 3 pins. I used a 3-pin DHT11 since it is now integrated into a module, just like what I’ve used. The 3rd leg in a 4-pin DHT11 is a null pin which doesn’t require a connection.

This Arduino library supports the DHT series of low-cost temperature and humidity sensors (DHT11, DHT21, and DHT22) and AM2301 sensor. This library has a DHT_DEBUG command which prints out debug messages in the serial monitor of the Arduino. It also defines the type of sensor that you’re going to use. It also has a function that converts Celsius values into Fahrenheit and vice versa for Temperature and Heat Index.

This library allows an Arduino board to control LiquidCrystal displays (LCDs) that has a Hitachi HD44780 (or a compatible) chipset, which is found on most text-based LCDs. The library works within either 4- or 8-bit mode.

Copy the code below into your Arduino IDE and press the upload button. Arduino code is from Adafruit website. Some parts are edited.

This defines the connection of the Out pin (DHT11) to the Arduino pin connected (pin 7). It also defines the type of DHT sensor that we’re going to use which is DHT11.

DHT dht(DHTPIN, DHTTYPE) is a function that calls the DHT11 sensor through the pin 7 of the Arduino.

There you have it! A simple humidity and temperature sensing project that can be assembled and played within 5 minutes. LCD is a good device to display data or messages instead of having to check your serial monitor every now and then. You can compare the data output in the serial monitor and the LCD. Click the magnifying glass on the top right of the Arduino IDE to display the serial monitor window.